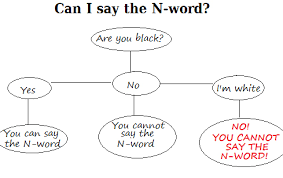 The following piece is from Clutch. It was written by Jouelzy.

It is amusing that in 2014 so much polarizing discussion around race has been bubbling over in spurts as social media rallies, rages and questions as think-pieces and op-ed’s are delivered. Most recently the Washington Post had a front page interactive feature on the etymology of the n-word. From ‘Niger’ to ‘negra’, ‘negro,’ ‘nigger’ and the modern euphemism ‘nigga,’ — in response to the NFL banning any form of the n-word, Washington Post attempted to dissect the highly controversial phrase and how it has evolved through generations both in pronunciation and in public reaction.

The best part of the WaPo piece is the video that explores the history of the word of the latin word for black ‘niger’ to the iteration of the word through 19th century American pop culture to the reverse popularization of the word in the Black American context throughBlaxploitation films of the 1970’s and finally the push of the dropped “-er” flexed with an ending of “-a” into the lexicon of mainstream society via Hip-Hop music. The video aptly ends encapsulating that we can’t decide collectively on the correctness of who can or how to use the word, but “the United States, after all, has never existed without it.”

The entire feature is available on WaPo’s online site and it’s a beautifully designed work, that plucks perspectives from people across generational, ethnic/race, gender and socio-economic lines. It may cause you to stop and reconsider your usage of the word. It may cause you to roll your eyes and carry on with life. Or it may just give you a reason to procrastinate from getting work done. You can click-through the videos, share an image (Pinterest!) or click-through to another article that further discusses someone’s perspective and dealings with the word.

And while I thought it would be an interesting day on Twitter as people retweeted the link and quick feed back on how they felt about the article, journalists reminded us that the conversation has been going on forever and shared links that were worth reading if you were so concerned. And then Piers Morgan couldn’t miss the chance to jump in on the conversation.

Piers Morgan published an article with the DailyMail. Let’s start here with why this is problematic. Morgan is British, the DailyMail is a British tabloid, who’s found a preponderance for covering the more low-brow crevices of American news, letting you know what your hotel cleaner is really up to (rummaging through your luggage) or the wealthy New York banker who is being sued for his “cocaine-fueled foursome.” This is where Piers Morgan decides to tell us, Black Americans, how to use or not use the n-word. Morgan really didn’t commit any serious crime. His piece summed up nothing, added nothing to the conversation. Much like any other conversation by white people who discuss the usage of the n-word by Black people. It’s the basic lamenting of white people, in whatever form, belying that they cannot use the word and so therefore in order to keep it from misuse Black people must work to eradicate it all together. That somehow the victim has to now police their own interpersonal language is the pittance of respectability politics that has found a new wind as it is pushed down the throats of Black people in 2014.

What Piers Morgan failed to understand or even remember was that theNAACP buried the n-word in 2007, with a proper funeral and all, it’s been a discussion and debate amongst the Black American community for ages. And much like those who question why Black people aren’t protesting against violence in their own community like they are in Ferguson, while they skim over the fact that we are and have been, Piers Morgan feeds right into the same bombastic ignorance.