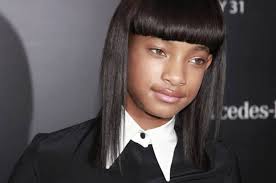 The following piece is from For Harriet. It was written by Felice León.

Willow Smith is in a league of her own. She is a curious, creative, intelligent, rebellious, envelope-pushing teen. Physically, Smith is in the midst of that awkward stage we’ve all encountered. But mentally and spiritually, she has a level of depth and intrepidness not typical of most teens. Unfortunately, this has been misunderstood… and even taunted. Two weeks ago, Willow and her brother Jaden spoke candidly about their perception of reality and other esoteric philosophies in a joint interview for T Magazine. In return, the world blasted the siblings. Why did so many people enjoy taking the opportunity to put down this 14-year-old girl and her 16-year-old brother? This harsh criticism can easily lend itself to a lack of self-confidence and insecurity in others. In a world where Black women are often reminded of our limitations – shall not’s and can not’s – we should embrace and encourage a little sister who has wings. Willow has the strength to transcend these boundaries.

Smith has chosen to send a message of empowerment to young girls throughout the world and her hit single, “Whip My Hair,” was a vehicle for this message. As she told T Magazine, “‘Whip My Hair’ was a great thing. When I look back I think, ‘Wow, I did so much for young black girls and girls around the world. Telling them that they can be themselves and to not be afraid to be themselves.’” Now, she sends a different message to the world.

Contrary to her contemporaries, Smith’s message is of enlightenment, self-awareness and in essence, spirituality. She described this transition in the interview with T, “And I’m doing that now but in a whole different way, coming from source energy and universal truths.” Even if you don’t agree with the philosophies that Smith explores, or how she perceives reality, she is fearless. The world should honor and appreciate an individual with enough confidence and moxie to say that she’s looking for “universal truths,” and wishes to include those ideas in her music.

A creative individual, Willow Smith is a musician in love with her craft. The beauty is that she doesn’t give a flip about what you, me or anyone on this planet thinks of her, and it shows. Smith is empowered by this nonchalance, and it influences her work (this is evidenced by her clothing, hair and music). Big brother, Jaden Smith spoke to this point in their interview with T. “Willow just dropped a song (“Cares”), let me quote the lyrics: ‘I do not care what people say.’ We both don’t really care.” The Smith teens have learned to disregard criticism, “what people say.” This is a feat, worthy of praise.

I often discuss this with a brilliant writer, mentor, and friend of mine. She describes this idea of detachment from the public as term, Eff the audience. Yes. Eff. The. Audience. The objective is not to be offensive. Despite the perhaps abrasive phrase, this behavior has neither a positive nor negative charge. Essentially, it is meant to say that artists should not to create solely to receive the validation of an audience. Rather, they should be so engrossed, overcome, and in love with the creative process (writing, acting, singing, cooking, etc.), that the audience becomes inconsequential. Eff the audience is an empowering notion. It makes for great work that maintains the integrity of the artist. This is what Willow Smith has mastered at 14 – an age when insecurity is rampant and many are fixated on winning the approval of their fickle peers. She has said, eff the audience. Kudos to her.

Beyond the music, Smith is searching — finding herself and making her way in the world. Some of the theories that Willow explores are difficult for the common person to understand – Quantum Physics, prana energy and meditation. Needless to say, the media went in. Headlines and comments sections were saturated with haters. Some publications used the words crazy, otherworldly and bonkers to describe the siblings. Some commenters went as far as accusing the Smith siblings of being in a cult. This is ignorance in it’s purest form. Sadly, the public criticizes what it does not understand.

For centuries, Black people in America have been misunderstood. Thus, the creation of dastardly narrow archetypes of Blacks: Mandingo, Sambo, Jezebel, and Sapphire. Today, these roles persist for Black youth who are in the public eye: the thug, the flashy hustler, the vixen, and the angry Black woman. Go figure. These archetypes are digestible and widely accepted by the media. But these stereotypes never allow Black people to be seen with depth. The world cannot accept that we are spiritual individuals.

Black spirituality—and I’d argue that spirituality in general—is understood only on a superficial level in this country. Many don’t deeply grasp the Divinity that is within us all, and they especially do not grasp the Divinity that exists within Black people. For centuries, Black people in this country were not even fully recognized as human beings, so how can they accept us as spiritual beings who transcend the constructions of race and gender? Yes, the media is baffled.