What about Team Brown Skin? 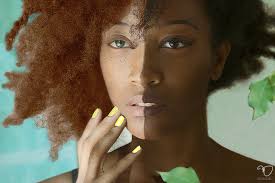 I never had to deal with colorism most of my life. It wasn’t until these past few years, I realized that racism is not the only hurdle we must overcome. I don’t want to sound predictable. I want to share my thoughts with you.

I’m a brown skinned woman. Brown as in carmel. As in Reginal Hall or Halle Berry brown skin. I’m not light skinned or dark skinned. In general, I would be considered the grey that fits right between the black and white. Understanding how I would be introduced to colorism was to experience it first hand.

Walking down the street, I passed two men where one stated that he wouldn’t talk to me because I was “too dark.” This, coming from a man who’s complexion fits the Taye Diggs and Omar Epps type. Before that, I was told by a dark complected associate that a gentleman stated he wasn’t attracted to me because he doesn’t like “light skinned bitches.” Classy. This coming from someone who’s complexion fits the Shemar Moore and Drake type.

Moving into where I can view the Black community as an even more complex culture, targeted by others as they target themselves, I understand that what divides is very small but maximized by people’s personal feelings about color. But people that share the mentality as those people I described seem to forget one thing: We’re ALL Black.

Black people as well as a few other ethnicities have been able to be diversified within their own culture. From different hair types to skin complexions, no two truly look the same.Yet when it comes to appearance, we take sides.

How many times have you heard the emcee say in  a night club that caters to Blacks “All the dark skinned or light skinned women make some noise?”

I personally never know what side to pick and hope that after both groups praise themselves, the emcee would say “All the BLACK people make some noise.” Imagine the response to that!

Not only is colorism alive in the Black community but Indian and Hispanic as well.

I never understood it.

But I questioned were these memes designed to poke fun at these stereotypes? Or were they really created and shared by people who believes those stereoptypes are true?

The darker the berry, the sweeter the juice. So they say.

What the poem revealed was his bittersweet relationship with Blacks. You can love those that look MORE like you, but you segregate yourself from those that don’t.

As I listened to the poem I sat with two women, one was lighter and the other was darker than me.

These examples I present, truly reflects that the less we come to understand how much we HAVE in common, the farther we are from one another.

It is my understanding that even though the society may pick and chose, no one bares fault in the way they were created.