We need to stop blaming black parents for underachieving kids 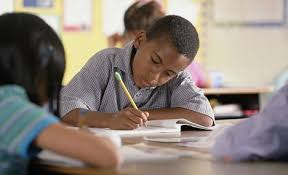 The following post originally appears on The Washington Post under the title, “Stop Blaming Black Parents for Underachieving Kids.” It was written by Andre M. Perry.

Mayors, teachers unions, and news commentators have boiled down the academic achievement gap between white and black students to one root cause: parents. Even black leaders and barbershop chatter target “lazy parents” for academic failure in their communities, dismissing the complex web of obstacles that assault urban students daily. In 2011, then-New York City Mayor Michael Bloomberg exemplified this thinking by saying, “Unfortunately, there are some parents who…never had a formal education and they don’t understand the value of an education.” Earlier this year,Pittsburgh Post-Gazette columnist Tony Norman diagnosed that city’s public schools’ chief problem: the lack of “active, radical involvement of every parent.” And even President Obama rued last week that in some black communities, gaining education is viewed as “acting white.”

Clearly, there is widespread belief that black parents don’t value education. The default opinion has become “it’s the parents” — not the governance, the curriculum, the instruction, the policy, nor the lack of resources — that create problems in urban schools. That’s wrong. Everyday actions continuously contradict the idea that low-income black families don’t care about their children’s schooling, with parents battling against limited resources to access better educations than their circumstances would otherwise afford their children.

In New Orleans this month, hundreds of families waited in the heat for hours in hopes of getting their children into their favorite schools. New Orleans’ unique decentralized education system is comprised largely of charter schools and assigns students through a computerized matching system. Parents unhappy with their child’s assignment must request a different school in person at an enrollment center, with requests granted on a first-come, first-served basis. This year, changes were made to the timing and location for parents to request changes. A long line began forming at the center at 6 a.m. By 9:45 a.m., it stretched around the block. By 12:45 p.m., officials stopped giving out numbers because they didn’t have enough staff to meet with every parent.