Update: Ray Rice to appeal suspension from NFL, will argue tape ‘was cleaned up’ 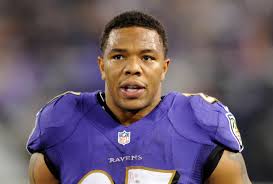 Ray Rice will appeal his indefinite suspension with the NFL.

The former Baltimore Ravens running back will argue the NFL based it off a cleaned up, edited version of the security tape from a Revel Casino elevator showing the star punch his then-fiance Janay Palmer.

The argument Rice reportedly intends to present is one of semantics:

Legal sources told Schefter that the TMZ tape of Rice hitting his then-fiancee was a cleaned-up, whittled down and condensed version of the events that took place in the Atlantic City casino elevator.

*The tape is edited heavily for clarity, and this is noted by TMZ in its original post. The raw video TMZ used as source material is here.

This implies that Rice will argue there were circumstances that provoked him to knock out his then-fiancee, and that the NFL didn’t take those circumstances into account when re-disciplining him. This would also imply the video of the punch in itself wasn’t enough evidence to warrant an indefinite suspension. The fact that Rice threw a punch powerful enough to knock his then-fiancee unconscious is not in dispute.

Former FBI director Robert Meuller will get the full tape of the incident for his independent investigation. The NFL was not able to get the tape when looking into the matter, and did not attempt to do so. Mueller is expected to have full access to everything now.

No matter what is discovered, there is no excuse for what Ray Rice did to Janay Rice in that elevator.

What do you think of these new developments?