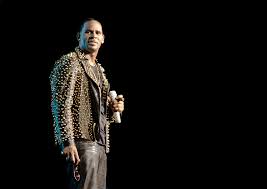 With the release of his latest album, Black Panties, R. Kelly has once again claimed a spot on Twitter’s trending topics. Not just for his controversial album title and cover, (Black Panties features an image of the R&B superstar seated as he “plays” a scantily clad woman who is sitting on his lap with a bow as if she is a violin), but for his sordid past. If I had to guess, I’d say that the PR move gone wrong executed by R. Kelly’s team a few days ago has a lot to do with people talking about the trial.  Someone on R. Kelly’s team had the bright idea of creating an “AskR.Kelly” hashtag, where the superstar would answer questions from fans on the internet. Of course most took time out of their day to crack jokes about R. Kelly’s case, where the singer faced 21 counts of child pornography after allegations of Kelly having inappropriate sexual relationships with minors surfaced.

I’ve always been a fan of R. Kelly. He’s a master of simple lyrics and catchy beats that set the mood. Whether it’s a stepper’s set or something a bit less PG, for more than 20 years Kells has maintained relevance in the music industry. The man has branded himself as the King of R&B despite the likes of Trey Songz, Chris Brown and Usher coming for the crown.

But as I sit here and read an article that recounts the history of the R. Kelly child pornography case, I become more and more conflicted. Should I not support R.Kelly because of these allegations? How can a man who faced 21 counts of child sex abuse still be relevant? WHY is his career not over? Are we accepting what could have been by continuing to support his music? So many questions.

Like I said before, I attended Kenwood Academy. There were instances and claims that R.Kelly was posted up in a van outside of the school. I witnessed the alleged van, with a couple of upperclassmen entering a few times. Not sure if it was him inside, but the rumors were strong and consistent. For the most part back in high school, many of my peers laughed off the fact that a grown man was prowling for young high school girls on the premises. They referred to the girls who hopped in the van with him as “bust downs,” pinning most of the blame on them for being foolish. Not once was the fact that this superstar, who had married Aaliyah at 15, who was currently married at the time with children, in the wrong.

I wonder if that prevalent sentiment that permeated the walls of my high school extends to the masses in this regard. Are we not taking these allegations serious enough? Is it because we are not as informed about the case as we could be? Do we even care? As you can read I have lots of questions.

The fact that R. Kelly was found not guilty doesn’t seem to matter. The jokes and sneers still fill the air whenever he’s mentioned, but as quickly as they appear, they are replaced with idol chatter about the next celebrity or aimless topic. We see men in positions of power accused of rape all of the time. Sandusky. Steubenville. Roethlisberger. Winston. Often, the charges are dismissed or settled out of court. The victim is shunned; left to feel like she did a disservice to the mainstream by speaking up. Do women lie on men? Yes. But it appears as if the victim is condemned, and forgotten about quicker than detectives can come to a conclusion.

Some say that R. Kelly’s past should be just that…his past and that those who disagree should simply boycott his music. But as someone who is truly torn, that seems like too simple of a solution. Sure boycotting his music will put a dent in his sales, but what about the several young girls he allegedly violated? Where is their justice? Unfortunately this post leaves me with a heck of a lot more questions than answers.

Where do you fall?