Teachers in hot water for ‘twerking’ in class 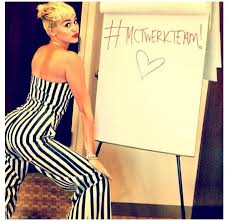 Two Mississippi teachers are in hot water after a video of them twerking in class went viral last week.

DeSoto County parents weren’t pleased to learn that their children were being exposed to Miley Cyrus’ favorite dance move.

”Yes, they shouldn’t be teaching my children how to twerk at all. That’s not good” said Michelle Davis. But students in the class say, the video is not at all what it appears. ”They were dancin’ and sayin’ what kids these days do and what they, like, shouldn’t be doin’. They were just, like, lightening up the mood” said Ryan Sanders.

Olive Branch High Principal Allyson Killough backed that up in a statement, saying; “The two teachers had good intentions to show how silly students look when they dance in inappropriate ways. This video was taken out of context.”

The video ultimately landed on a Facebook page often critical of DeSoto Schools. The administrator removed the video after it sparked a series of threatening responses.

The teachers will not be disciplined for their actions, but it’s fair to say they probably will refrain from twerking in front of students in the future.

Should the teachers face disciplinary action for twerking in front of their students?

Are parents blowing the incident out of proportion?