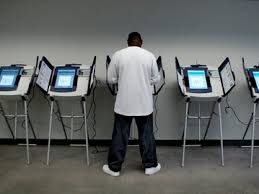 According to a study released by the University of Delaware’s Center for Political Communication, white people’s perception of voter ID laws change after being show photos of blacks at the polls.

And it isn’t for the better.

From Center for Political Communication:

White survey respondents who saw [an] image [of a black person at the polls] expressed stronger support for voter ID laws than those who saw no image. Seeing an image of white Americans using voting machines did not affect white respondents’ support. Research faculty David C. Wilson and Paul Brewer supervised the nationwide study.

“Our findings suggest that public opinion about voter-ID laws can be racialized by simply showing images of African-American people,” said Wilson.

Voter ID laws require individuals to show government-issued identification. The issue is that a disproportionately large amount of people of color do not have adequate means to obtain such identification.

Do the findings of the report surprise you at all?