Study: housing homeless cheaper than leaving them on the streets 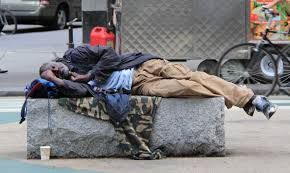 According to a new study, it’s cheaper to give the homeless a permanent place to live than to let them live on the streets.

The study, conducted by the University of North Carolina Charlotte,  found that in its first year, Moore Place tenants saved $1.8 million in health care costs. The facility houses 85 chronically homeless adults and was the subject of the study.

The tenants also spent 84 percent fewer days in jail, with a 78 percent drop in arrests. The reduction is largely due to a decrease in crimes related to homelessness, such as trespassing, loitering, public urination, begging and public consumption of alcohol, according to Caroline Chambre, director the Urban Ministry Center’s HousingWorks, the main force behind Moore Place.

One tenant, Carl Caldwell, 62, said he used to go to the emergency room five to seven times a week, late at night, so he could spend the night there. “You wouldn’t believe my hospital bills,” Caldwell, who hasn’t had health insurance for years, told The Huffington Post. Caldwell was a teacher for 30 years and became homeless five years ago, when he lost his job and his roommate moved out.

Moore Place has a “housing first” model. It’s a strategy based on the notion that homeless people can more effectively deal with other issues — addiction, employment and health once they have housing.

Thoughts on the study?

Should city officials take a more active role in keeping people off of the street?

Or does the responsibility fall moreso on the individual?