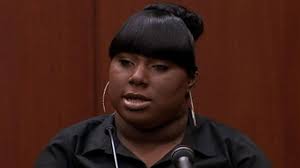 A little over a year ago, the world met Rachel Jeantel. The friend of 17-year-old Trayvon Martin took the stand during the George Zimmerman trial, and her testimony became more famous than her facts.

Now, the 20-year-old is speaking out, and blames herself for the way the verdict went down.

Jeantel was asked if she blamed herself when Zimmerman went free.

“A little bit,” she replied to CNN.

Asked if she should have said something different or acted differently on the stand, she answered, “Act different.” Jeantel said the jurors in the case didn’t take her seriously as a witness, judging her for the way she looks and talks.

What many seem to be forgetting here is that the focus should not have been on Jeantel’s dialect, but on the facts of her testimony.

She was unfairly targeted by the media, due to her Caribbean accent and limited vocabulary. It is unfortunate that this young lady holds the burden of blaming herself for the jury’s decision to set Zimmerman free.