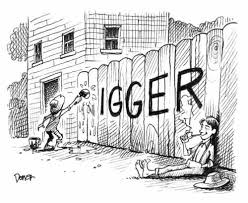 I’m starting to suspect that white people and the word nigger are mutually exclusive. Of course I’m joking, but what is it about this term that seems to attract such constant diction among a select few of Anglos? Out of an entire privileged life of yeses and open doors, is it because usage of this word is off limits? Someone help me understand. What I do understand is that historically white people have enjoyed superior roles in agriculture and dueling out of the term. Coined in 1619 by John Rolfe to describe African slaves, you’d think by now people would’ve gotten out of their systems; apparently not. The term was built around a cruel system of slavery that has funded modern day capitalism. Hell, corporate America is still benefitting from niggers. For example, JPMorgan Chase revealed their links to slavery. In a statement made by the banking giant, between 1831 and 1865, two of the company’s predecessor banks – Citizens Bank and Canal Bank in Louisiana – accepted approximately 13,000 enslaved individuals as collateral on loans and took ownership of approximately 1,250 of them when the plantation owners defaulted on the loans. So, while you may not be getting any royalties for dropping the N bomb, when you use such a hateful term, it’s just another example that we’re still living in a post Reconstruction society.

We also live in a country of free speech, which at times feels like it includes hate speech. Some white people are going to call black people niggers just like some dogs will shit on your front lawn. I’m not here to regulate or control stupidity. However, since I have a resume of experience in being called a nigger, I can advise on how not to act when your black loved one approaches you and says they were just called a nigger by a white person. So, here’s what not to do:

Don’t blame it on the alcohol. While goose may get you loose, it doesn’t make you say nigger.

Don’t start talking about the weather.

All I’m advising is that you say, “I’m sorry that happened to you, are you alright?” That’s all, and if they care to talk about it, just listen. On a side note, has someone trademarked the word nigger? If not, can a black person trademark the word and donate to Barack and Michelle?