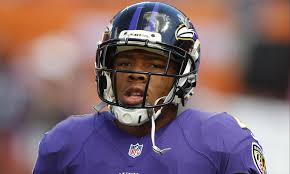 Rice was originally suspended for two games in July under the NFL’s personal conduct policy after being charged with assault following a Feb. 15 altercation with his then-fiance.

The running back had already served the first game of that suspension when, on Sept. 8, a video surfaced showing Rice punching Janay Palmer, now his wife, in that elevator.

Within hours, the Ravens released Rice and NFL commissioner Roger Goodell extended the suspension to indefinite based on the “new evidence.”

Goodell and the Ravens say they never saw the video before Sept. 8.

“This action taken by our union is to protect the due process rights of all NFL players,” the NFL Players Association said in a statement. “The NFLPA appeal is based on supporting facts that reveal a lack of a fair and impartial process, including the role of the office of the commissioner of the NFL. We have asked that a neutral and jointly selected arbitrator hear this case as the commissioner and his staff will be essential witnesses in the proceeding and thus cannot serve as impartial arbitrators.”

The association said that the collective bargaining agreement requires a hearing date to be set within 10 days of the notice of appeal. It also noted the hearing will require a neutral arbitrator to determine what information was available and when it was available to the league.

On Wednesday, the NFL said that Goodell never intended to hear Rice’s appeal personally. Rice will remain suspended indefinitely until the appeal is resolved. The union added that an employee cannot be punished twice for the same action when all relevant facts were available to the employer at the initial time of punishment.

The league said Rice can apply for reinstatement, but only after her convinces Goodell that he is “addressing this issue.” Rice’s acceptance into and completion of a diversion program could lead to the assault charge being dropped. In a letter sent to all 32 NFL team owners last month, Goodell acknowledged that he “didn’t get it right” the first time when dealing with the Ray Rice situation.

He then announced a new policy which states that first-time domestic violence offenders would face six-game suspensions and repeat offenders would be suspended indefinitely. Rice was exempt from the new policy as he already received his penalty.