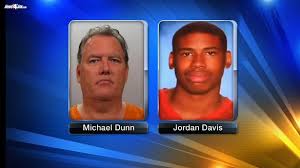 A high-profile trial is set to begin in Florida involving a man who fatally shot a 17-year-old teenager.

Michael Dunn shot and killed Jordan Davis in the parking lot of a Jacksonville gas station in November 2012.

The man claimed he shot in self defense. But authorities found no guns in the car the teen was riding in. […] Dunn told police that he asked Davis and three other teens, who were parked next to him at a Jacksonville gas station, to turn down their music. Dunn said he heard threats from the teens and saw a gun in their car.

He said he feared for his safety, and that’s why he grabbed his gun and fired into the vehicle.

He entered a plea of not guilty. The case has attracted mass attention due to similarities to the case of Trayvon Martin and George Zimmerman. Both cases involve State Attorney Angela Corey.

Predictions on the trial and verdict?

Will this be Trayvon Martin all over again?