DJ, producer, and overall hip-hop legend is not happy with skateboard king and critical darling, Lupe Fiasco’s new single, “Around My Way (Freedom Ain’t Free).” The song samples Pete Rock and C.L. Smooth’s classic “They Reminisce Over You (T.R.O.Y.).” Arguably one of the best 5 songs of the genre, the dirge was composed in the aftermath of the tragic death of Troy “Trouble T Roy” Dixon, a dancer in Heavy D. and The Boyz. The song is incredibly personal to Pete Rock, and he  took to Twitter last night to make it  known that he was unhappy with Fiasco: 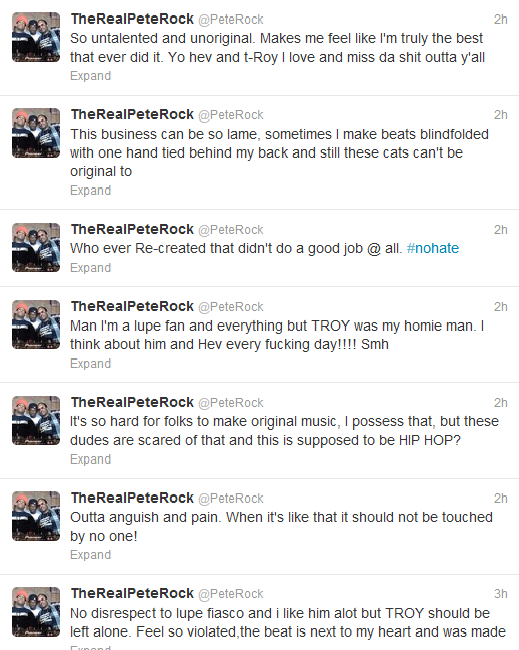 Interestingly, in an interview on Chicago’s WGCI this morning, Fiasco claimed that his camp got approval from Pete Rock before using the sample. Furthermore, Fiasco was incredibly surprised that Pete Rock was upset over his usage, since the track has been used on numerous occasions.

Lupe has a history of shrugging off hip-hop legends. After screwing up the words to A Tribe Called Quest’s “Electric Relaxation” during Vh1’s Hip-Hop Honors show several years ago, Fiasco hubristically shrugged off critics of his flub, saying that he wasn’t familiar with ATCQ’s catalogue and had never heard the entire song, even though “Electric Relaxation,” like “T.R.O.Y.” is a staple to any legitimate hip-hop diet. Fiasco went on to say that ATCQ requested that he perform their music, a claim that was later disputed by Q-Tip.

Does Pete Rock have a legitimate beef or is he just being cranky?

Are today’s emcees still not giving up proper respect?