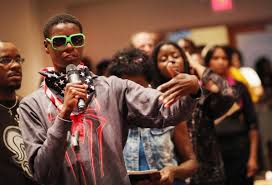 One of Ferguson, Missouri’s most prominent demonstrators has been arrested and charged with setting fire to a Berkeley convenience store last week.

St. Louis County police arrested Joshua Williams, 19, of St. Louis, on Friday after several local media outlets and store surveillance captured images of him trying to set a pile of wood on fire outside the QuikTrip on North Hanley Road early Wednesday.

Williams confessed to setting fires at the store in a videotaped interview, according to court documents.

Police say WIlliams entered the QuikTrip shortly after looters shattered its glass doors in protests of Antonio Martin’s death. The 18-year-old was shot by a police officer earlier at the Mobil gas station across the street. Surveillance footage from the station shows Martin point what police say is a gun at a Berkeley officer before being fatally wounded.

Williams can be seen in videos both inside and outside the QuikTrip. On Friday and Saturday, a small group gathered outside the St. Louis County Justice Center in Clayton to protest Williams’ arrest. Some argue the video images are not clear enough.

May this young activist be freed soon.