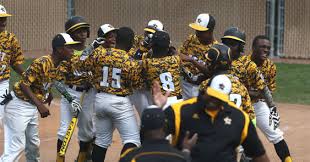 “West Region played a great game, can’t really say anything, they played great defense and they were hitting the ball well, nothing you could do about that,” said DJ Butler, a Jackie Robinson West player.

“We tried to bounce back because we knew after we lost that we still had a chance, so we just forgot about it when the game was over and said we’ve got to come back today and win,” said Pierce Jones, a Jackie Robinson West player. The loss was a break in their winning streak that began in the regional qualifying rounds.

Coach Darold Butler said he was glad to see the players keep things in perspective after the game. “I’m glad they’re relaxed because if they’re relaxed, I’m relaxed,” Butler said. Parents said they are proud of their sons’ reactions, saying these are the real-life lessons bigger than baseball.

“With raising an African American child, we always preach and teach resilience, sometimes things may not always fall in your favor, but you have to keep your head up and you have to keep going,” said Venisa Green, the mother of a Jackie Robinson West player.