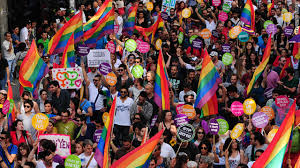 The following post originally appeared on MUSED, and was written by BYP100’s Aaron Talley. It appears under the original title of “Gay Pride is For White People.”

Pride” season is upon us, and it’s no secret, except perhaps to white people, that gay pride parades are very white, hollow things. They usually take place in “gayborhoods,” which are usually affluent communities predominated by white gay men. Communities that usually contain bars that mostly white gay men frequent, and if you choose to be black and attend these establishments, it is not long before you feel sexualized, objectified, or ignored altogether if not outright discriminated against. And if these neighborhoods are anything like Boystown in Chicago, you might find yourself policed. Therefore, these neighborhoods are usually clear about their message: be gay but don’t be black, or trans*, or disabled, or Other. The living proof of this phenomenon is that mainstream pride parades are often accompanied by smaller prides that create space for other salient marginalized identities. Other prides like “Black pride,” or “trans* pride,” for instance.

Unfortunately, I’m not surprised by the reality that pride festivities are curated by white gay men for white gay men. Accepting this fact, I’m more than happy to just attend black gay prides with my friends. But part of me must realize, that as queerness becomes more mainstream, it is incumbent upon queer communities of color to make sure that we put pressure on the national narrative to keep queerness from being synonymous with white, skinny, able-bodied, cisgender maleness.

Take for instance, the marriage equality movement, that great red herring of equality. It is essentially meat with no bone. Yes, it allows for queer folks all around the nation to start getting married. But for most queer folks, marriage is not high on the priority list. For queer folks of color, who are subject to disproportionate levels of poverty, homelessness, violence, and health disparity—marriage provides us with very little resolve. And so, the movement that is the defining LGBTQ issue of our time is an issue that largely benefits upper middle class queer whites.