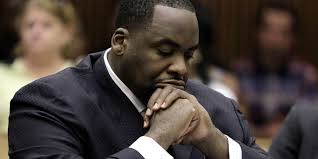 Former Detroit Mayor Kwame Kilpatrick has been sentenced to 28 years in prison.

Kilpatrick, 43, was convicted of 24 counts including racketeering and extortion in March.

At least 18 officials have been convicted during his tenure as mayor.

From The New York Times:

In 2008, Mr. Kilpatrick resigned after he lied under oath during a police whistle-blower lawsuit and approved an $8.4 million settlement to try to cover it up. After pleading guilty to charges of obstruction of justice, Mr. Kilpatrick served four months in jail and was ordered to pay $1 million to the city. He was soon behind bars again for hiding assets from the court and telling a judge that he could afford to pay only $6 a month in restitution.

“Mr. Kilpatrick’s meteoric fall — from potential savior of a struggling city to prison-bound symbol of financial mismanagement — may be the closest they will get to holding past leaders accountable for decades of disappointment and poor fiscal decisions,” writes the New York Times.

Kilpatrick made history in 2001 when he became the city’s youngest mayor at age 31. His sentencing comes at a quiet moment for Detroit as the city attempts to rebuild itself in bankruptcy court.

What a fall from grace.

What do you think of Kilpatrick’s sentence?

Will Detroit ever bounce back from its political and economic woes?