First Lady: ‘U.S. is ready for a female president’ 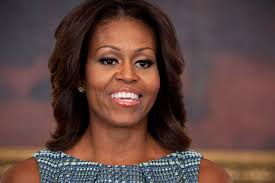 First lady Michelle Obama says that America is ready for a female president.

The comments came during an interview with Good Morning America’s Robin Roberts.

At a working families summit in Washington on Monday, ABC News’ Robin Roberts asked Obama when she thought it would be time for the nation to elect its first female president.

“That should happen as soon as possible,” the first lady said. A video of the interview was posted on Mediate.

“I think this country is ready,” Obama said. “This country is ready for anyone who can do the job,” she said, adding that her husband had already proved you don’t need a “particular race or gender or background or socioeconomic status.”

As for Mrs. Obama, she said her post-White House plans will not be political.  “It will be mission-based and it will be service-focused,” she said.

Thoughts on the First lady’s comments?