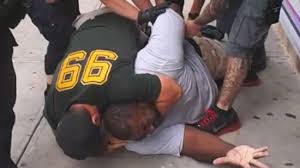 The death of a Staten Island man who was put into a choke hold by members of the NYPD was ruled a homicide by the city’s medical examiner.

The incident provoked outrage last month after a witness filmed police placing Eric Garner in an illegal choke hold while arresting him for selling cigarettes illegally.

Garner, who was 6-foot-3 and 350 pounds, could be heard saying that he could not breathe.

After his death, officers told supervisors that they did not think excess force was used and initially blamed Garner’s death on a heart attack before the film went viral.

The New York City Medical Examiner ruled that the cause of death was “compression of neck (choke hold), compression of chest, and prone positioning during physical restraint by police.”

They said that acute and chronic bronchial asthma, obesity and hypersensitive cardiovascular disease were “contributing conditions” but still ruled the manner of death a “homicide.”

Daniel Pantaleo, the officer who placed Garner in the choke hold, was placed on modified assignment pending the outcome of investigations into the incident by the NYPD Internal Affairs unit and the district attorney.

The FBI is also monitoring the case.

Pantaleo’s gun and badge were taken away pending the outcome of the investigations.