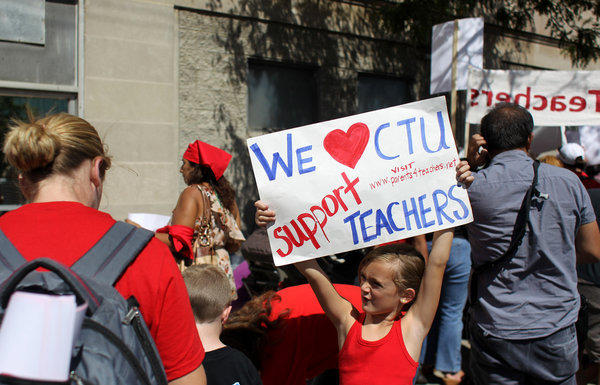 Classes are not in session today in Chicago, as the Chicago Teacher’s Union has officially gone on strike.

Mayor Emmanuel and the Teacher’s Union were unable to agree on a contract.

“This is totally unnecessary, this is avoidable, and our kids do not deserve this,” he said.

The mayor, who fashions himself an education reformer, wore no tie. While Emanuel usually doesn’t mince words, his anger appeared more internalized, more resolute. At moments, he appeared to be on the verge of tears. His hand shook visibly as he took a sip of water in between statements. “This is a strike of choice,” he said.
From Emanuel’s perspective, after weeks of negotiation, only two issues remain unresolved. The first is a principal’s right to choose the teachers that work in his or her school. “It’s essential that the local principal who we hold accountable for producing the educational results not be told by the CPS bureaucracy … and not be told by the union leadership who to hire,” he said.

Second, he added, is the impasse over how to implement a recent law that requires standardized tests to count for, initially, one quarter of all teacher evaluations. “I’m telling you, these were the final two issues,” he said, exasperated.”

Thoughts on the CTU strike?