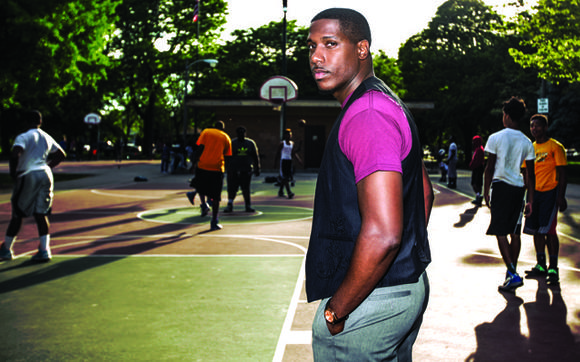 Jahmal Cole and his wife have been living in Chicago’s Chatham neighborhood for six years now. At the time, the Coles had heard very little about the violence, but since they moved into their home in 2008, the house has been burglarized twice and the ring of gunshots is all too common.

Yet and still the Coles remain in their neighborhood, and are standing up to the violence.

When Cole tells people he lives in Chatham, “They say, ‘You’re crazy, Jahmal.’ I get that all the time. … Every day I wake up thinking this is a beautiful day. Then I read something [in the news about Chatham].”

Deadly shootings have been in the headlines recently for Chatham, which saw one homicide per month on average in 2013 and 2012. […] Chatham residents and business owners told RedEye that the community, a longtime enclave for middle- and upper-class African-Americans, is down on its luck, suffering from a high unemployment rate and a sense of hopelessness that begets violence. But Chatham can be fixed, Cole and others say, it just needs new ideas to stop its downward trend.

“Chatham isn’t a lost cause, by far,” said Zuli Turner, who owns two businesses on 79th Street. “There is a lot of stuff going on in Chatham. These things—it’s scary. It’s the minority, but sometimes the aftershock of the violence, it can really just permeate down to the bone.”

Cole wrote a book about Chatham called “The Torch of Decency, Rekindling the Spirit of Civic Organizations. He said his neighborhood suffers from a lack of positive role models and that children look up to gang members.

He, along with other residents are currently trying to implement positive loitering, a concept where people stand in troubled hot spots and promote messages of peace.

What will it take to effectively stop violence in urban communities?

Is positive loitering a solution?