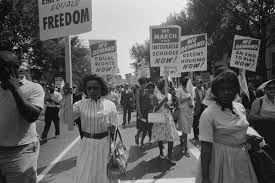 The following post is from the New York Times. It was written by Alan Flippen.

The Times has converted all of its 1964 issues into a digitized, searchable format. Each week, The Upshot will unearth an item from 50 years ago and put it in the light of today. “U.S. Negro Voters Put at 5.5 Million” appeared on Oct. 13 and can be seen in its original format onTimesMachine.

Weeks before the presidential election of 1964, African-Americans and their advocates were working toward a record turnout.

The National Association for the Advancement of Colored People announced that it had registered 5.5 million black voters in 34 states and the District of Columbia as of Oct. 1, and estimated that the black electorate could number as many as 12 million.

In the end, that was about how many blacks turned out, according to census data compiled after the fact: Turnout reached 58.5 percent for an estimated black population of 20.7 million. Data on voting by race isn’t available for years before 1964, but the N.A.A.C.P. estimated at the time that no more than 5 million African-Americans voted in the presidential election of 1960.

Black voters wouldn’t go to the polls at such levels again until President Obama’s first election in 2008, when 60.8 percent of them voted. In 2012, 62 percent turned out for Mr. Obama’s re-election.

Black Turnout Rising, but Not in Midterms

Nearly 60 percent of African-American voters went to the polls in 1964, a level that wouldn’t be reached again until President Obama’s first election in 2008. But while black turnout in presidential years has been increasing for nearly two decades, it has been flat in midterm elections.

What’s most impressive about the 1964 result, though, is that it happened at a time when some Southern states still viciously repressed blacks’ attempts to vote. That wouldn’t begin to end until the following year, when the Voting Rights Act passed with the strong support of President Lyndon B. Johnson, who owed much of his re-election margin to that enormous black turnout.

The results of the presidential elections of 1964 and beyond clearly show the effect of the Voting Rights Act of 1965. In 1964, black turnout outside the South hit 72 percent, a level not seen since, but in the South it was only 44 percent. Since then, black turnout has converged in all regions of the country.