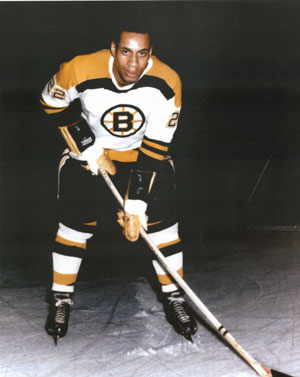 Working in sports has its advantages and disadvantages. With my last team, the first question anyone ever asked when they learned where I worked was: can I get tickets? Now, the reaction is completely different. “YOU work in hockey?”

In a world where a Black man can be President of the United States, people are still shocked when a Black man laces up his skates for a hockey game. Everyone has their ideas about why Black men don’t play hockey. I’ve heard everything from “they don’t make skates that big” to “they can’t get used to white guys with sticks”.

Participation in sports is largely based on three factors: geography, national interest and wealth. In this case, ice hockey is bound to be more popular in geographic areas where ice is more prevalent. So kids with access to rinks, or ponds that freeze over in the winter are more inclined to play ice hockey because they have overcome an major obstacle: access to ice.

If a particular sport is always on television, played at your high school, and talked about in your home, you are more likely to find that sport interesting and much more likely to participate. Hockey isn’t the most popular sport in America but it is growing. And with that growth in popularity, we can expect a similar increase in diversity of participants. As it stands, it’s not just the number of Black Americans that’s lacking in hockey, it’s the number of Americans regardless of skin tone.

It is obviously more expensive to play hockey than it is to play basketball. You can’t just put on a pair of sneakers and grab a ball. There is more equipment necessary, sticks and pads and pucks and skates. Not to mention rink fees. And hockey is unique in that a secondary skill is required: the ability to skate. So add skating lessons to the list and you’re looking at a pretty penny to get a kid started in hockey.

While there are factors that may seem to limit the number of Black hockey players, to say that Black people don’t play hockey is erroneous. If you’ve never seen a Black person play hockey, you haven’t seen much hockey.