Adrian Peterson suspended without pay for remainder of NFL season 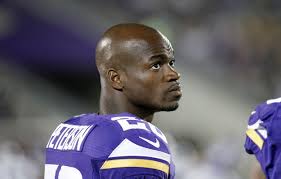 The NFL decided to suspend Minnesota Vikings star running back Adrian Peterson without pay for the rest of the 2014 season, according to a statement released by the league.

Peterson will not be reinstated before April 15 because he violated the league’s personal conduct policy “in an incident of abusive discipline that he inflicted on his four-year-old son last May,” the league said.

Peterson has been on the exempt/commissioner’s permission list — which kept him off the field, with pay — since September after allegations he disciplined his son too harshly with a “switch” or thin stick. Initially charged with felony child abuse, Peterson pleaded no contest to misdemeanor reckless assault this month.

“The timing of your potential reinstatement will be based on the results of the counseling and treatment program set forth in this decision,” NFL Commissioner Roger Goodell said in a letter to Peterson. “Under this two-step approach, the precise length of the suspension will depend on your actions. We are prepared to put in place a program that can help you to succeed, but no program can succeed without your genuine and continuing engagement.”

Peterson’s reinstatement also depends on his rehabilitation, how he cares for his children and whether he commits further violations.

“We respect the league’s decision and will have no further comment at this time,” the Vikings said in a statement. The NFL Players Association said that Peterson will appeal the decision, calling the discipline imposed on the athlete “inconsistent” and it will “demand that a neutral arbitrator oversee the appeal.”

Peterson hasn’t played since September 7. He has missed nine games so far.

Thoughts on the decision?